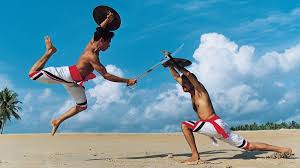 Kalaripayattu (pronounced Kalarippayatt) is a martial art and fighting system, which originated as a style in tamilakam, southern India (North Malabar).[1] The word kalari first appears in the Tamil Sangam literature (c. 300 BCE to 300 CE)[2] to describe a battlefield, as well as a combat arena; in practice, the term kalari tatt denoted a martial feat, while kalari kozhai meant a coward in war.[2] Each warrior in the Sangam era received regular military training. It is considered to be one of the oldest surviving fighting systems still in existence in the world.[3] Although originally practiced in Kerala, it also practisied by southern parts of Tamil Nadu.