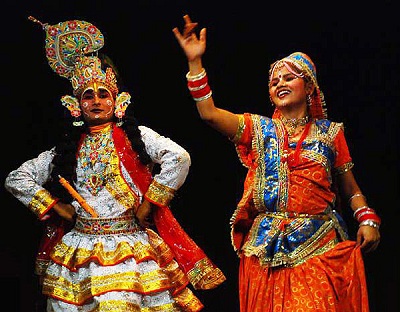 The Rasa lila is part of the traditional story of Krishna described in Hindu scriptures such as the Bhagavata Purana and literature such as the Gita Govinda, where he dances with Radha and her sakhis.  Rasa Lila is a popular form of folk theatre especially during the festivals of Krishna Janmashtami and Holi. The folk dance is performed by mandalas (group of people) who roam from one place to another playing instruments like dholak, flute and singing the legends of Lord Krishna.